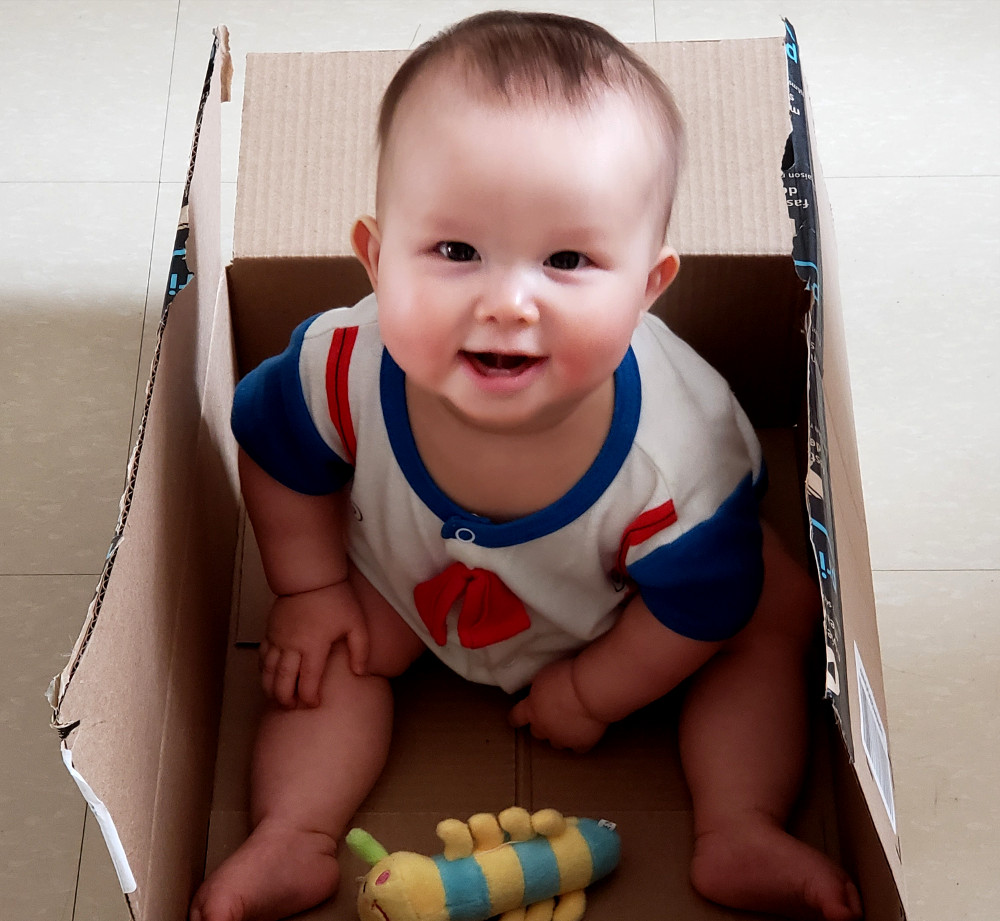 Who knows what pleasures lurk in the heart of babes?

(I wrote most of this letter yesterday, on your actual 9th monthday, but you’ve been more work than usual since your first teeth came in now almost a full month ago(!). I’ll likely post more complaints about that soon, but for now, please accept my apologies for celebrating your anniversary in print a day late.)

Many (many!) years ago, I shared a house with my best friend, Vern, and his son Samuel. The three of us lived together for about three years, while Samuel grew from five to eight years old.

Those years had their ups and their downs (of course they did! As I’m sure you know by the time you start reading these letters), but one of my favourite moments came one Christmas. Vern and I cooked up a feast for guests that included his sister Debbie, and her two sons, one about Samuel’s age, one a little younger (or a little older; I forget).

I have three delighted memories from that evening. My first was just how how cute a gaggle of little kids can be. As someone observed that evening, as we watched the kids chasing each other throughout the house like so many puppies, they acted like, well, a pack of puppies!

My second delighted memory came after the opening of the gifts. The presents ranged from the elaborate and expensive (a LEGO pirate ship might have been among them) to simple and dollar-store cheap: foam swords, water-pistols and the like.

Well, guess which toys were the ones played with? If you guessed the cheap ones, you guessed right! The expensive toys were laid out on a table and forgotten, while the kids chased each other throughout the house, shrieking with less as they waved floppy swords at one another.

(If you’re wondering about the third delighted memory, that came in the form of a bottle of very old, single-malt Scotch, which particular brand I have forgotten; but the taste of that almost silly smooth liquor is indelibly etched in my mind’s taste-buds. Lois, if you’re reading this, and you remember, please let me know — or better yet, send me a bottle! But I digress.)

Fast forward to the present.

Your mother and I have noted — Mama Raven with mock bitterness, Papa Z with simple wry amusement — that you, too, have so far shown a strong preference for the cheapest of toys over the more expensive ones.

In truth, your favourite toys are mostly not, nominally, toys at all; in truth, they are pieces of garbage.

You do enjoy knocking over the tower of blocks I make a habit of building for you, and playing with the various books (or “books”) we leave in your cage playpen, but the ones that clearly most fascinate you are refuse from your parents.

And on Monday, in advance of your ninth birth-month day, you got a new one which, if your initial reaction is anything to go by, will be a favourite beyond the foreseeable future (which, realistically, is about three days). Nevermind that “vitamin” bottle, now you have a … a box! Yes, a small box which once contained the protective case for Papa’s cellphone; a box to play with, to hug and to hold, and, of course, to toss to the floor so that Mama or Papa will pick it up for you and give back to you so that you can toss it away again.

So, happy nine months on this earth, Baobao! May you always take pleasure in the everyday things that surround you, even if as I hope, your horizons never stop expanding!