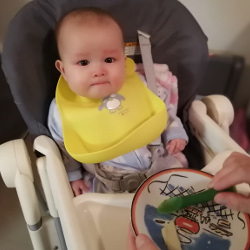 As I type this (first draft), you are on the floor behind me, playing with some toys while getting in what we call “tummy time”. You’re supposed to be napping after a 200 millilitre breakfast of your mother’s milk, but you weren’t having any of that — any try at laying you down resulted in a lot of tears and noise. So, here we are: daddy is trying to write and hoping you tire yourself out sooner rather than later.

One of the notable qualities of the human animal (and maybe of all mammals) is how quickly we adapt to new situations, how easily the shocking and strange becomes normal. And even if that “new normal” is more stressful than the old, we carry on as if stress were just one of those things.

So it is that people in war zones still have love affairs between air raids, and homeless people right here in Ottawa can be seen talking and laughing on the street, as if it were perfectly normal to wake up in the morning without a roof over one’s head. (It wasn’t that long ago when there were almost no homeless people in Canada; but that is a rant for another day. Let me just say that I hope that, by the time you’re reading these letters, homelessness is once again part of our barbaric past and not part of a pathetic present.)

So it also is that life goes on in Raven and Papa Zesser’s home under “self isolation.” We are stuck inside, but we take our quotidian pleasures. Chief among them, of course, being your rapid development!

I think it’s true of most parents, that we get thrilled about the smallest things, about every “first”, no matter how normal. Or normal-ish; after all, how many small babies like the strong taste of a two year-old cheddar?

As it happens, I have a decided preference for strong cheeses — the mildest I had in the fridge is that two year-old cheddar. But why not give her a taste? we wondered. Worst comes to worst, she’ll spit it out as a bad taste and soon enough forget about it.

And so we did. And there’s really nothing more to say about it that isn’t clear from the video, below! Bon apétit!

If you listened closely, you’ll have heard me carrying on about the virtues of cheese made with unpasteurized milk. We had a bit of a panic attack after this feeding when we realized that cheese can carry listeria.

But we calmed down quite a lot when we learned that (a) listeria is most often a problem with soft cheeses, like brie; (b) that even then most listeria comes from dirty equipment in the cheese factory, not from the milk itself; and (c) that hard cheeses like cheddar are very unfriendly environments for listeria, especially if the cheese is more than 60 days old. And since this cheese is closer to seven hundred days old, I think you’re safe.

But still, I’ll be picking up some pasteurized cheddar for you the next time I venture out for groceries …