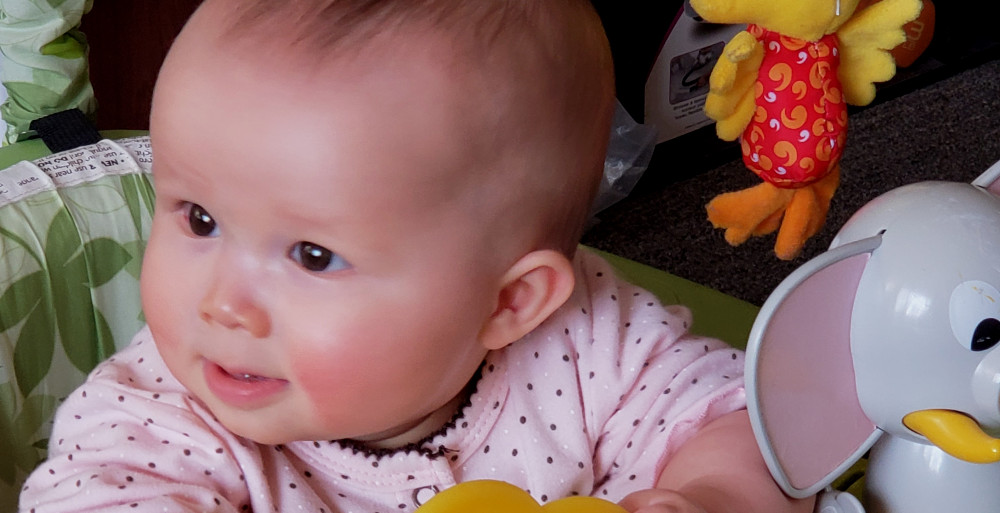 Never say never, I guess. While my last letter was slugged “Inconsolable”, the truth is you were (mostly) consoled the very next day, after you finally got to sleep.

The top of your first tooth was — barely; you do tend to squirm, especially when we want you to stay still (of course! You’re only eight months old). And getting you to just open up and say “Ahhh!” is something only your mum has managed yet.

This letter’s slug leads off with “Now consoled”, and mostly you have been. Your first tooth was brutal, of course, but your second seems to have come in with a lot less trauma.

So I don’t have a lot to say about the process, other than, “Keep it up kid!”

And speaking of keeping things up, my near panic a couple of weeks back has well and truly subsided. Since then you’ve been sitting up quite well (though not yet on your own: we need to do that, but once you’re on your bum, you’re pretty stable) and your crawling has progressed to the point that, this afternoon, I erected a prison for your safety — and my piece of mind.

I call it a cage, but in truth it’s a pretty good piece of technology, and one that allows you about as much freedom of movement as my watchful eye did yesterday. And now, I can go pee without worrying you’re going to eat one or more of my books, or worse.

We are a little concerned with your appetite lately. Certainly you’re way down in your milk consumption. Where a month ago you were probably averaging 800 millilitres of your mother’s finest per day, you’re now hovering between 500 and 600. But on the other hand, you’re usually packing away 10 grams of cheese, and four or eight tablespoons of your mum’s brilliant purees, along with, often, some fruit puree’d with yogurt.

So when I say we’re a “little concerned” about your appetite, I do mean a little.

That’s it for now, really. You’re still usually a happy baby (and when you’re unhappy, our neighbours probably wonder if we’re torturing you, god bless your powerful little lungs!), you’re getting along better and better with your big brother Carl the Second and you’ve even learned to high five! (Video coming soon! Mama Raven, have your phone at the ready!)

It’s been a very long day with you, but I wouldn’t trade this new life of mine for anything, daughter mine!