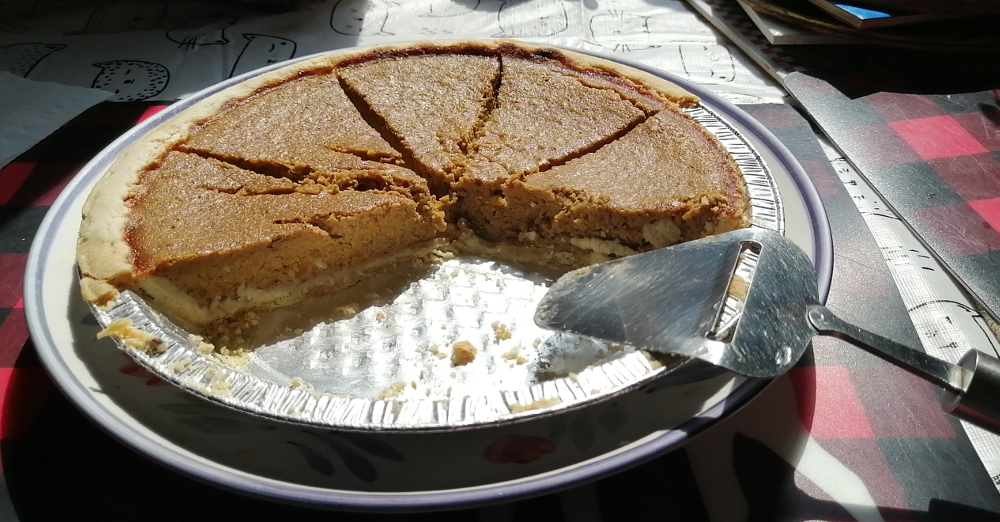 The secret’s in the spice (and the pumpkin)!

Some things are hyperbole, others are just facts. The headline for this recipe is of the latter variety. This is the world’s greatest pumpkin pie recipe, of that I am morally certain.

I can’t take too much credit, though, as I invented it by accident many years ago, when I mistook garam masala for some other spice — ground cloves maybe, or allspice.

In any event, what came out of the oven was a revelation, and I have been using garam masala as my (not so) secret pumpkin pie ingredient ever since.

Pre-heat your oven to 400ºF (200ºC). Lightly whisk the eggs in a large bowl. Add the remaining ingredients and mix them well. Pour the mixture into a prepared pie shell (I used to make my own, but recently discovered Tenderflake shells, which are made of basic lard-based pastry without artificial preservatives or colours, and I can’t be bothered to struggle with making them myself any more), place the shell on a cookie sheet or anything else that will catch the crumbs, and bake the pie for 45 to 55 minutes.

At 45 minutes, test the pie by inserting a butter knife into the pie about an inch (2.5 cm) from the side. If it’s done, the knife will come out more or less clean; if it comes out with sticky bits attached, give it another five minutes. Repeat that if necessary.

When done, place the pie on a rack and wait impatiently until it’s cool enough to eat. Some may want ice cream or whipped cream to go with it, but honestly, this pie is so damned good you shouldn’t need anything else to go with it.

There’s no getting around the fact that gutting a jack-o’-lantern pumpkin takes a little work. The rind is touch and it’s thick. You need a sharp knife or cleaver and some patience.

Before you peel it, scoop out the seeds, clean them, then toss them with a little olive oil and salt and set them aside. Put them in the over with the pie for 10 minutes or so, then crunch away, seeds and all!

Once you’ve peeled the beast, cut the meat of the pumpkin into chunks and steam them until their soft. The smaller the pieces, the quicker they’ll cook. Once soft, let them cool a bit, then blend to a puree. That’s it!

If you enjoyed this post, please feel free to …