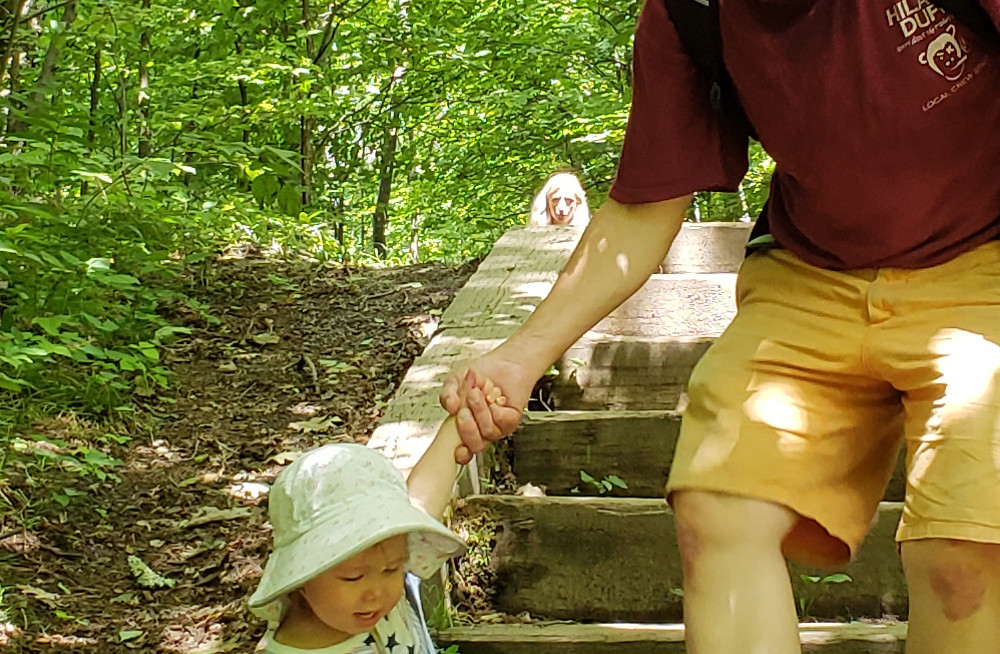 Lesson Learned? We can hope!

This past weekend Mama and I decided to rent a car and, finally, get you out into the Wonderful World of (sort of) Nature, with our first outing into Gatineau Park since some time last fall.

We chose the Luskville Falls trail in part because it is farther away from Ottawa than most of the park’s trails, and in part because that is where the Canadian Shield ends (or begins, depending on your point of view), landing almost vertically on the Saint Lawrence Lowlands. And I, having spent several childhood years living in house without running water or electricity in the bush outside of Sudbury, feel a deep, deep kinship with the ancient mountains that are that pre-Cambrian range.

What I forgot is that you are still a very small person, and also, that you certainly don’t share some kind of mystical connection with those things that formed me, what with you still being in the process of being formed and all.

Anyway, we were lucky enough to find a parking space only a few metres from the trail’s start, and I was excited to be showing you something o! so much more interesting than yet another urban park!

We made our way to the entrance and started down a long flight of rugged wooden steps built right into the earth. You seemed okay with that (you like stairs!), if a little nervous, but there was an infestation of some kind of moth or really ugly butterfly that creeped Mama out and did nothing to soothe your nerves and (if I’m being completely honest) they kind of grossed me out, too. I kept calling them butterflies, but I knew I was kidding myself.

(According to one 10-year old we passed on the trail — I overheard her Explaining Things to one of the adults with her — they were Gypsy moths. Since I’d overheard, I felt free to enquire, “Really?” and what I took to be the kid’s mom looked at me, smiled wryly, and shrugged. But I’ve just now checked the Wikipedia entry, and I think the kid knew what she was talking about.)

In any case, there were an awful lot of those invasive pests!

Nevertheless, bugs are just something one has to deal with when venturing into the bush in summer, and we were well covered in bud dope anyway, so we carried on.

But the deeper we got, the less happy you got. Looking back, I think everything was just a little bit much, a little bit big for you. (And also: moths. Moths everywhere.)

The trail ran pretty straight, it was narrow, and the forest closed round it pretty tight. I imagine you felt very small out there, no matter how much Papa assured you there was nothing to be afraid of.

“That’s easy for you to say, Papa!” I imagine you thought, over and over again.

Because the sun was mostly hidden from view, because there were a lot of moths and those moths would flit and dip very close to us; and because the trees were everywhere and there was nowhere to be seen a hint of city, no cars, no buses, no exciting garbage or dump trucks.

That’s not to say that you had no fun at all. You found a stick that intrigued you quite a lot, and some small stones that you could roll in your hand. You also seemed intrigued, if not entranced, by the stream running below the falls itself.

And when we reached what I believe was Luskville Falls itself (for sure, it was a falls!), you happily chowed down a small snack while sitting on my knee and, for a while, were unbothered by the moths.

But they didn’t leave us alone for long, and Mama was not having a good time, either. (As you know, Mama and insects do not get along!)

Even I was finding the little grey bastards annoying, but even so, it was with more than a little disappointment that I agreed to turn back. But also with some relief, since you refused to get off my lap when I tried to stand, and I realized that I was going to have to carry you down (and up) (and down) and up and out again.

There’s not really a whole lot more to say, I guess. We took you into a dark forest path, one that was swarming with ugly insects, and you were intimidated by it. At points, you were frankly scared.

What I’ve realized, and what I fear I will need to be reminded of from time to time in varying circumstances, is that you are young, and that you will always be younger and less experienced than I am. (At least, until you start branching off into realms of experience I haven’t explored. Which might start happening sooner than I like, now I think of it. But I digress.)

The fact that you enjoy walks in city parks does not necessarily mean that you will enjoy going into (what seems to you) to be deep woods. And I should certainly put aside my fantasies of taking you camping for a few more years!

So that’s that, I guess. An anecdote, and yet another lesson learned by He Who Is Supposed To Know What He Is Doing.

Indeed, as a result of this experience, we have decided that your birthday trip will not be to Parc Omega, but will instead take you to a petting zoo much closer to home, and much more age appropriate. I hope the pictures from that trip show a much happier little girl than do those accompanying this letter!