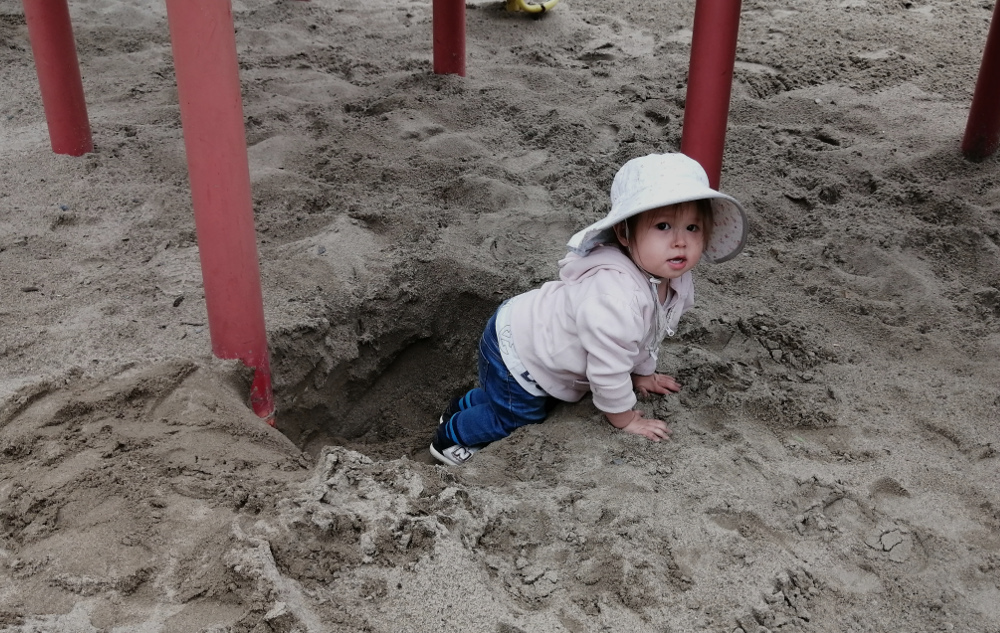 The loneliness of the isolated toddler

The following is a very lightly-edited transcript of a recording a made this morning around 11:40 this morning, while I was at a local park with Baobao. The photos were also taken around that time and at that place.

The recording was prompted by seeing so many kids playing together in one (crowded!) place at a time when my daughter is starting to notice that she isn’t among them. She’s used to playing only with me or her mother, so I don’t think it’s really bothering her yet, but it’s hard to imagine that she is not now being affected by her isolation.

I’m recording this in the park. Baobao was playing near the bike path when another little girl walked up — approached her — and I immediately jumped up and pulled Baobao away.

The mother saw my mask (I guess) and said, “Oh! Sorry!” and I just shook my head.

Because Baobao is not vaccinated — no child is vaccinated in Ontario!

Right very close to us, the sandy playground is full of kids, none of whom seem to be related to one another. There must be a dozen of them, all playing, all un-masked. The parents are un-masked, what look to be the nannies are un-masked. Nobody’s wearing a mask, nobody’s social distancing, and there’s a god damned, fucking pandemic …

And nobody seems to care except me.

I know that’s not true — I do see other people masked — but right now I don’t see a single mask in the vicinity except the people who are working in the park.

Otherwise no one’s social distancing and one of the people working in the park seems to have his mask pulled down. [Note: When I got a little closer some time later, I realized I was wrong about that, too. Most of the park staff over-seeing the wading pool were also going around bare-faced. I don’t know if the rules have been relaxed of if those people were just breaking them.]

It enrages me. This wouldn’t be necessary if people would just take sensible god damned precautions. But here we are, almost two years into the fucking pandemic, and … I’m pissed off.

Post-Recording Comments: My anger isn’t aimed only at people who aren’t taking Covid-19 seriously, of course. Most of the governments in the western world are guilty of, at best, giving their citizens mixed messages about it, and the Ontario government in particular is guilty of a monstrous level of neglect, lies, and incompetence. Worse, our governments, media and, god knows (pun intended) our churches have been guilty of obvious lies about all sorts of things at least since the first Gulf War in 1991.

It’s kind of understandable that many people are, now, sceptical about what science says we should be doing to put an end to this scourge, especially since, for most people, the science is being translated by politicians and press many quite rightly regard with a lot of suspicion in the first place.

But in the moment, especially when it becomes more and more obvious that my daughter is now old enough that her isolation from other kids is becoming a problem for her development, I can’t help but feel the proverbial blood boil when I run into huge groups of individuals who either don’t care about their health or the health of their children, or who are too ignorant to understand the risk they are taking, and the fact that their actions are helping to prolong this crisis.

If you think I’m over-reacting, you’d better have a damned strong case to back you up before you say so.

Hey there! Since you’re reading my diary, why not …