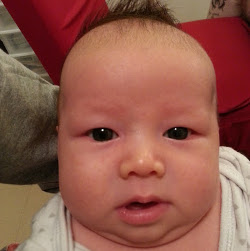 I’m sure this isn’t the first thing we’ve done wrong, but it’s the first major mistake we’ve made.

Well, maybe not major, but still, I don’t feel good about it.

It wasn’t long after we brought her home that we noticed she had a pretty prominent “milk tongue”, or so we thought it was at first. A milk tongue is a white coating on an infant’s tongue that appears after feeding. However, Baobao’s didn’t disappear, but merely faded (a bit) at first. And after a few weeks, didn’t really fade much at all.

About two weeks ago I became concerned and did some research, and pretty soon concluded she had thrush (Wikipedia article here).

After discussing the matter with Raven, and noting that Baobao didn’t seem to be bothered by it – her appetite was good, her mood was good – we decided to wait until our already-schedule appointment with our GP to get a professional’s opinion.

That was Monday, and as soon as our doctor looked at Baobao’s tongue, she took a swab for testing, but also wrote a prescription for an anti-fungal meditation. “I’m sure it’s thrush,” she said.

And so we started dosing her Monday afternoon. She doesn’t much like the medication (we’re injecting it into her mouth by the half-millilitre or so, for four one-millilitre doses per day), but neither does she hate it. Still, it’s a victory if she doesn’t regurgitate at least half of the greenish fluid at every dosing.

Now, in my defence, she really didn’t show any signs that the condition bothered her. Her appetite has been good (at least since the first week or two, as we figured out feeding), and she’s mostly a very good-natured baby, so no reason to suspect she was in pain or even discomfort. Tongue just looked kinda gross, is all. And the information I found online all said it wasn’t anything serious enough to require immediate attention – she wasn’t going to die if we waiting a week-and-a-half to see our doctor.

But I’ve still sometimes been feeling as if I screwed up (and in my self-flagellating mind, if’s me that screwed up, not we), as if I failed my first fatherhood exam. Or maybe not quite that bad. Think of it more as a C-, maybe, a warning that I need to do better next time …

How long before your first mistake, the first time as a parent that you felt you’d let your baby down?

Post-script: Mid-way through supper earlier this evening, before I’d edited this post, I noticed that I had a voicemail. It was from our GP, Dr. Chow. Turns out the swab came back negative; Baobao doesn’t have thrush and we should cease dosing her with medication.

How’s that for an anti-climax? Have a picture of a milk-drunk baby to celebrate the good news! (Photo courtesy of Raven.)