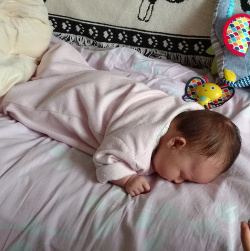 Return of slumber, that sweetest oblivion

Last Thursday I came awake around 2:30 in the afternoon. Bleary-eyed I do what we all do nowadays and checked my phone. There was both a voicemail and an email from my dentist’s office. The email was from my regular hygienist and read, “Hey! Did you forget about me?”

The voicemail was from Claire, the receptionist, who asked more or less the same thing.

And in fact, I had forgotten about the appointment. Or rather, I had forgotten that it was Thursday, and so, after feeding our baby, I had laid down on our couch “just for a minute” and awoken as the afternoon was starting its slide towards autumnal evening.

I’ve said it before, but it bears repeating: The first week or so after we brought Baobao home was like nothing I have ever experienced before. Not even that time during my mis-spent youth, when I deliberately stayed awake a full 72 hours just to see how long I could remain conscious, compared to the exhaustion I felt so recently.

And though that first week was by far the worst, as you can see from last week’s debacle (they were very understanding and I made it to my rescheduled appointment this morning without incident), sleep deprivation is still an issue.

Since that brutal Wednesday night/Thursday morning though, it seems we might have turned a corner. Baobao has taken to gorging herself between midnight and 1 or so in the morning, then – can it be true?!? – sleeping for six hours straight!

Now, this trend has only lasted for (I think) five days, and I certainly don’t want to jinx myself, but five days is long enough to at least hope that the trend is actually something permanent – or as permanent as anything in the changeable world of a newborn baby can be. Isn’t it?

Are there any parents out there who remember when their kids began to sleep through then night? And did it last?