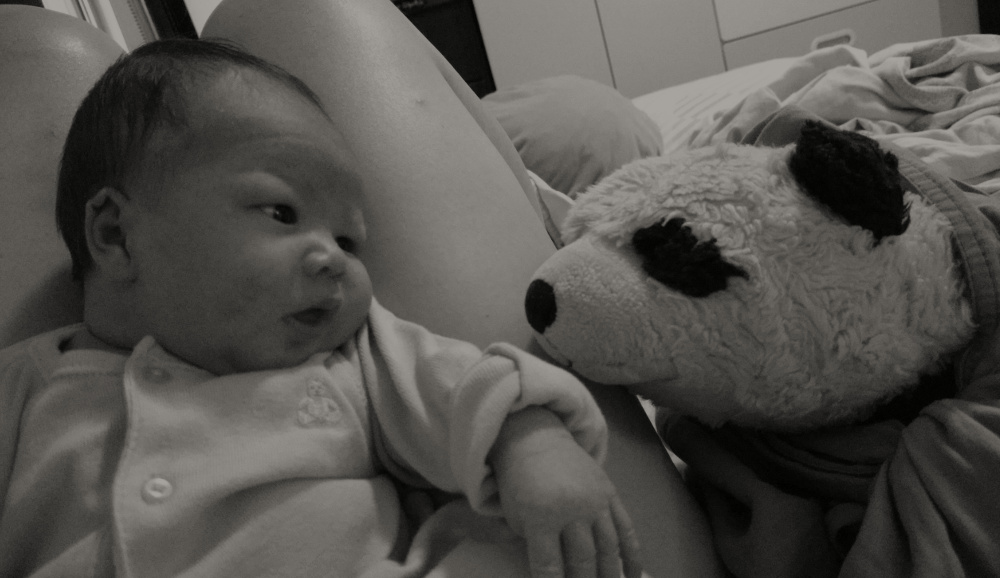 5 Things I’ve learned about pregnancy and beyond …

I had hoped to start blogging about my adventures in fatherhood right away, and to add to it daily – or at least, frequently – right from the get-go.

But obviously, life (or rather, lives – three of them!) got in the way …

I have recounted Baobao’s birth already, but an awful lot has gone on since that slimy bundle of flesh and hair dropped from the womb and into the cold world before passing into our warm and loving arms (Enough bragging! – ed.). In an effort to get caught up, and so to encourage myself to get to this more regularly, here are five surprising things I’ve learned over the course of Raven’s pregancy, and after it.

(Warning: There is a photo at the bottom of this entry that some readers might find kinda gross. Read on at your own risk.)

1. Breast-feeding can be hard

I was in grade seven or eight the first time I witnesses a birth: our cat Sasha had four kittens and, so it seemed, everything came naturally, from Sasha’s cleaning her kittens of the afterbirth to suckling them, instinct seemed to provide for full kitten-care.

Not so much with a human; in homo sapiens, it seems both mother and baby need to learn how to do what I thought would come naturally.

Even the most basic aspect of breast-feeding can be difficult. Baby must be convinced to latch properly; if she doesn’t, the mother’s nipples can be really hurt. In our case, we’ve had to use a breast pump, because “natural” feeding is simply too painful for Raven (who, remember, used not pain-killers at all during labour and delivery!).

2. Babies are expected to lose weight after birth

Really, they are. Up to 10 percent of their body weight within the first week (although, if the loss hits 10 percent, it is cause for concern, though not panic). In our case, we hit the 10% mark, but with the advice of doctors and nurses at the Monarch Centre, she is now drinking milk like there’s no tomorrow and looking chubbier by the day.

3. There is tired and there is post-natal tired

Apparently most pregnant women develop the linea negra, a long, dark, vertical runs down the centre of the woman’s abdomen more or less from somewhere above the navel down to the pelvis.

I’ve known quite a few mothers over the years, but somehow not one of them thought to mention it to me.

5. The placenta is huge

And it looks more or less like a pork liver, as Raven pointed out.

As you can see below, there is a good reason medical staffers talk about “birthing the placenta”, although to me it looked more like they were hauling a bucket up from the bottom of a well, using the umbilical cord as the rope.

Nature is awesome, but also kind of creepy.