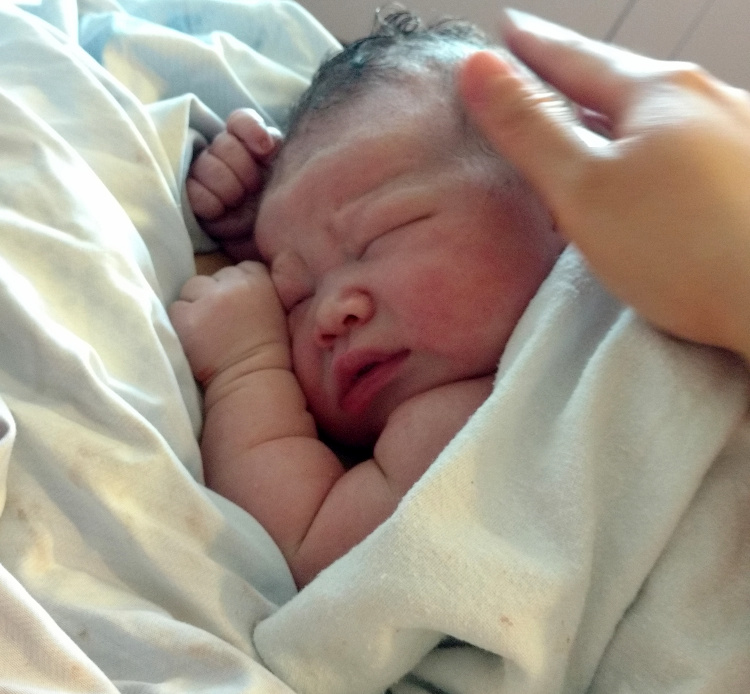 If you’ve seen an actress pretend to give birth on television (as who among us has not?), you might think that almost all births are more or less the same – intense stress as a woman grunts and pants while surrounded by a crowd of more (or less, if it the show is a sit-com) competent helpers and onlookers, advising her to Push! Push! Push!

And I guess that my daughter’s arrival wasn’t really all that far off the televisual cliche. But there were elements that made it unusual, if not entirely unique.

The end of the beginning actually started on the previous Sunday. I had come home from my weekly rec-league, co-ed soccer game (that, at 54, I am still able to play, with and against people who are mostly in their 20s, is a fact that gives me almost as much pleasure as does playing the game itself). My wife, my sweetie, my partner, told me that she was feeling strange; she thought she might be having contractions, though the medically-proclaimed due date was not for another seven days.

She assured me it didn’t hurt too much, so we went to bed, prepared for nothing or everything the next morning.

Come Monday, suspicion had become near-certainty. We were going to go to the hospital. But not before certain necessities were taken care of. I phoned, and then emailed, my employer to let them know it looked like I would be starting my family leave a week earlier than planned, then Raven set out what we hoped would be our final breakfast as a childless couple.

That fairly traditional Cantonese breakfast ingested, we phone a cab, packed up our things, including our virgin car-seat, and soon food ourselves at the Civic.

We were seen fairly quickly and around 13:00, Raven was examined and declared Not Ready for Admission But Too Far Gone to Be Sent Home.

Why not, said a kindly nurse, walk around for a couple of hours, see if the contractions come closer together, or if your water breaks?

We didn’t walk all that long, but instead headed to the cafeteria (one run by actual people, not a corporate clone; perhaps not coincidentally, the food isn’t bad) and about an hour and a half later, Raven’s water did break.

At 15:00 hours, she was examined again. Her water breakage was proclaimed the real thing and she was measured at 3 centimetres dilation. Everyone figured it was going to be a long night.

After a couple or three hours of increasingly agonizing cramps (sans any pain killers whatsoever), Raven argued with a nurse who was telling her to Breathe!, saying, “It feels like the baby is coming out!”

She had to repeat variations on that theme (hands dug into my gut like eagle’s claws all the while) two or three times, before the actual doctors showed up and, three official pushes (following disobedient Raven’s seruptitious first two) “pushes” in, the god-damned crown appeared between her legs!

And no more (probably quite a bit less) than five minutes later, the baby was extracted and resting in all her barely toweled-off glory, on Raven’s chest, while the medical staff hurriedly (too hurriedly, maybe) pulled out what proved to be a perfectly intact placenta.

Anyway, it’s been a hell of a week, but Wednesday, just before leaving the hospital, we decided: Popeye!

Well, not really Popeye; that would cruel, despite that one-eye stare.

What we did name her is a matter I will come to next time – or at least, soon. Why not now? Raven and I are still working out exactly how public this blog should be: what to reveal, what to keep private. For Raven, it is pretty cut-and-dried: No identifiable photos, no real name; she keeps a very low internet profile and likes it that way.

I, on the other hand, have at times been almost sluttish in my willingness to tell all (or at least, most) online, and still am.

But now I have a daughter to think of. How much of her life can I in good conscience share with the world? And is a photo taken when she is a week old okay, but not when she is five? Or 10?

I’d be interested in knowing how others have dealt with this issue. How much is too much? When does your child’s right to privacy begin? At conception? And if not, when?

For now, as I type this it is 04:19 on Tuesday the 27th. My daughter has past her one-week anniversary and we have an appointment pretty early in the morning.