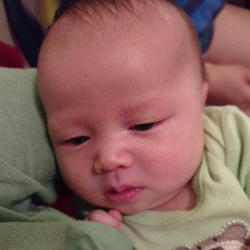 Trying to) gather some thoughts on “Baby Brain”

This website was supposed to include a daily blog – or at least, a regular blog. Those who know me from other venues are probably not too surprised that getting my words (and pictures) out on a regular schedule has not come as easily as I had hoped – but I had hoped!

Dare I blame it, though, on “Baby Brain”?

She is visibly no longer a newborn; she is noticeably heavier, probably a kilo past her birth-weight and she has already outgrown a couple of onesies, not to mention that we have two boxes of diapers intended for babies from “0-3 months” that we’re worried she won’t be able to make use of. A good problem to have, of course.

But I digress. Dare I blame that on baby brain?

A friend (hi Sally!) recently wondered, “… isn’t only the mom ‘allowed’ to have baby brain?” but I say No! Daddies go without sleep, daddies change diapers, daddies wake in the early hours to feed the crying wee one! (A topic for another entry: Raven and Baobao were not able to come to a breast-feeding entente. She (Raven) is using a breast pump, which is supplying about two-thirds of the child’s requirements, and we have resorted to formula to, well, supplement. And almost all of it enters our baby via a bottle. As I said, a topic for another time.)

Back to the point: You’re damned right I’m allowed to have baby brain, Sally! The kid keeps me awake crazy hours, she interrupts me when I’m trying to write when she wants food or needs a change or just wants some company.

None of which is meant to bitch. Because the time is going so fast. She is changing so fast. She’s learning to lift her head and hold it in the air. Her eyes are tracking better and better. She’s been smiling. And she really seems to like hearing me sing. (My version of Cat Stevens’ “Moonshadow” is pretty good at getting her to sleep, at least sometimes.)

But think in long, coherent sentences and paragraphs? Maybe not so much. Not yet.

So here’s a snippet of another song, one just for my daughter, Baobao.

Video of Papa Zesser singing to his daughter. (Sorry about the portrait orientation; you can blame that on Raven’s baby brain!)