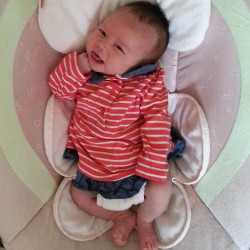 She’s an artist, she don’t look back …

I think I’ve mentioned here (sometime before my long silence; I’ll do my best not to let that happen again any time soon!) that no words of warning were able to prepare us for that first week or so after we brought our baobao home. Neither I nor Raven have ever been that tired before – and please god, we never will be again.

Things have improved considerably since that first week, but to say we are generally “well-rested” nowadays would be a lie. The little one wants to eat every three or four or (more often, lately) five hours, and when she wants to eat she WANTS TO EAT RIGHT NOW.

And somehow, it has come to pass that I have been taking the night shift. She usually wants to be fed around 04:00 hours. Which would be fine, if she didn’t also seem to decide that that time is a good one (for a change) not to go right to sleep after eating (and a diaper change), but rather, to fuss for the next two or three or four – or five – hours.

To make a long story short, I finally managed to get to sleep around 09:30 on Sunday morning, maybe a half hour before Raven arose to take her own turn with the baby.

Only this Sunday, she called me awake at 14:00. I’d been asleep for four and half hours after being awake for about 19. “Honey,” she said, “I need your help.”

And so it was that Papa Zesser found himself holding his naked baby over the bath tub while her (the baby’s) mother sprayed her down with the shower head.

The baby, of course, wasn’t remotely ashamed. Indeed, as you can see above, she seemed rather pleased with her work.