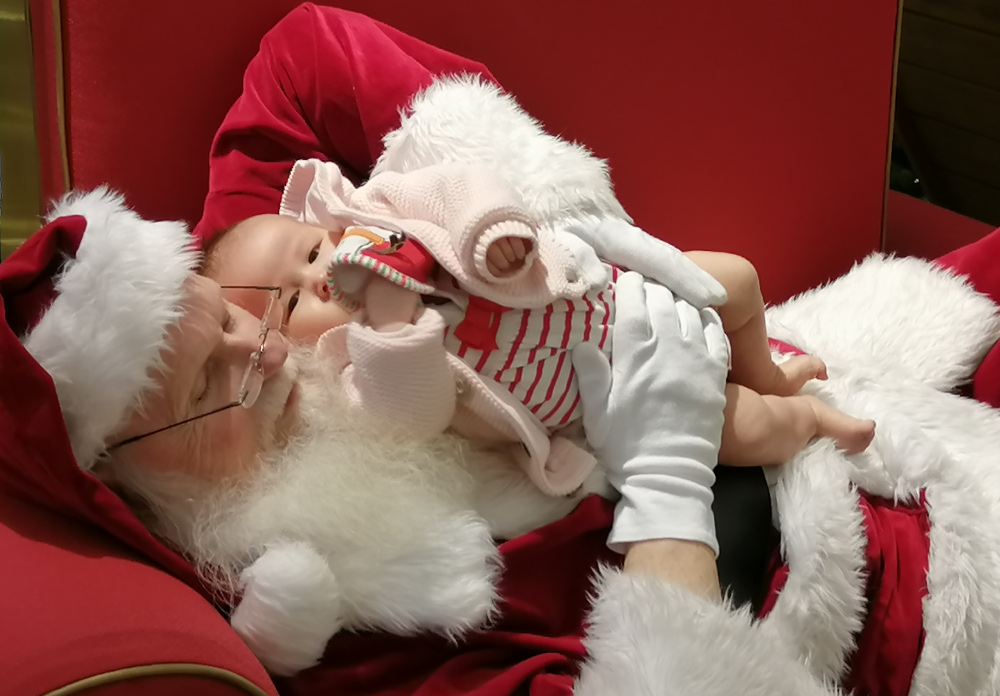 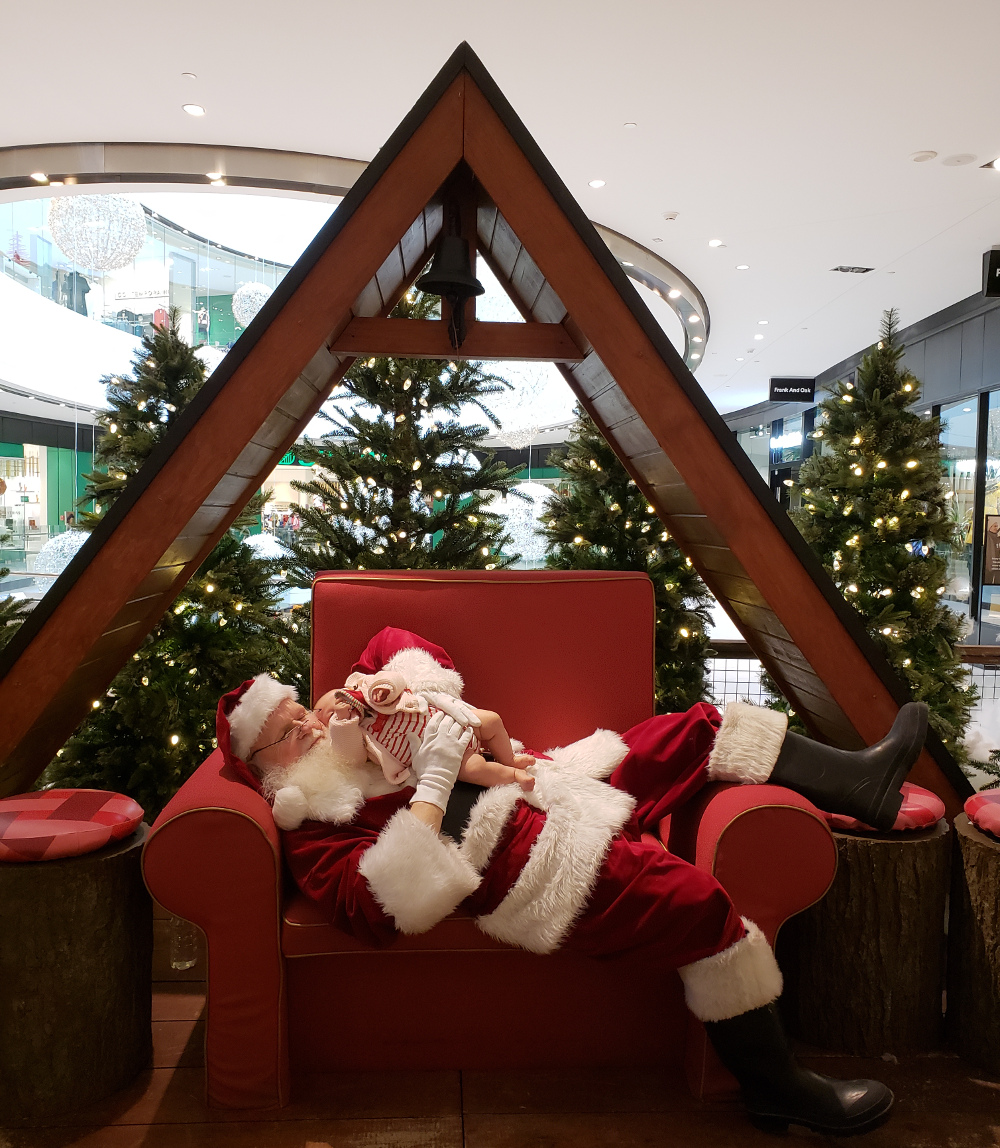 Now two Fridays ago, with your fourth month anniversary rapidly approaching, your mother and I bundled you up and made our way to the Rideau Centre, downtown Ottawa’s cathedral of commerce. As you can see from the photo above, we went not to shop, but to visit Santa Claus.

Now, I’ll be honest with you, this wasn’t an encounter I was very enthusiastic about. I have a long, and not especially happy relationship with ol’ Saint Nicholas, for both personal and for philosophical reasons.

The personal? When I was very young — possibly as young as five or as old as eight, but most likely, six or seven — I confronted my mother with what must have been denials I had heard at school? Is Santa Claus real? I asked your grandmother.

And, confronted with a direct question, she did me the honour of telling me the brutal truth: No, he isn’t real.

That was nearly 50 years ago now as I look back, so I can’t give you the details of the conversation, nor of what, exactly, went through my mind when I was confronted not only with the truth about Santa Claus, but with the realization that (there was and is no pretty way to put it) my parents had lied to me.

All that I remember for certain, is that I cried.

One thing about growing up, which I imagine you will already have started to know, whenever it is you start to read these letters, is that it is marked — indeed, you might say that it is defined — by a series of heart-breaking revelations. “Loss of innocence”, it is often called.

Which brings me to the philosophical.

It is not only that Santa Claus, like god or the devil, is a mythical creature — and that telling a child he is real is literally a lie — but that learning that your parents are, or can be, liars, is a brutal truth to learn, at any age.

Of course, I soon forgave my parents for that lie but, as you can see by this letter, I never forgot it.

On the other hand, believing in Santa Claus can be a lot of fun. If II remember the ultimate disillusionment, I also remember — if only just — the thrilling excitement that was Christmas Eves with my brother, your uncle Tom.

The ritual of putting out milk and cookies for Santa; the whispers in the dark as my brother and I found sleep impossible to come by, wondering whether Santa would bring us the gifts we’d asked for.

And the thrill of waking o! so early, then barging into our parents’ bedroom to roust them from their slumber so that we could go downstairs and find out what Santa had brought us.

Were those joyous thrills worth the ultimate disillusionment?

As I write this letter, you are not yet four months old. You have, in a manner of speaking, met Santa Claus (or one of his deputies; in this case, one who seemed like a very nice man), but of course you had no idea at all who he was, or who his costume represented.

In truth, you barely reacted to him at all. Three month old babies are not known for caring who talks to them or holds them; so long as you are fed when you are hungry, you seem to be a pretty happy child.

We went because your mother, who grew up in the far East, did not grow up with Santa Claus as an important cultural touch-stone. But for some reason, she took a real liking to the idea when she came to Canada and, if she had had the nerve, would have visited Santa on her own for a photo-op as an adult. Now that we had you as an excuse, there would be no stopping her.

The only question was, would your father spoil her experience with his cynicism?

For it’s true: I am cynical about the whole Saint Nicholas/Father Christmas/Santa Claus folderol.

If you asked me, I could tell you how the modern iconography of the jolly old elf was largely created to sell Coca Cola; how that image spread to commercialize what had been a strictly religious holiday. (Not that Coca Cola bears all the blame. You could also point fingers at Charles Dickens and, of course (probably), at Clement Clarke Moore, who arguably started the whole mythology, or at least, who first codified it.

What I wouldn’t be able to tell you with a straight face is that Santa “exists as certainly as love and generosity and devotion exist”. My Santa-less world is not remotely “dreary”, no more than it is meaningless, simply because I do not believe in any kind of a god.

That notorious 1897 editorial went on to claim that without faith in the “unseen world”, there would be “no poetry, no romance to make tolerable this existence … [t]he eternal light with which childhood fills the world would be extinguished.”

Needless to say, there is nothing eternal about childhood innocence, as my own experience with Santa Claus easily proves.

The question that I (and your mum) must then wrestle with over the next year or two, is whether the temporary joy of belief in the unreal is worth the price of (yes) ultimate disillusionment.

I want you to know, always, that you can trust me. That you can come to me with any problem, and that I will do my best to treat it with respect and with honesty (if not, when you are very small, with every detail).

I don’t want, when you are five or six or seven, to come to us with the open question, “Is Santa Claus real?” ((and its accusatory cousin, “Did you and Mummy lie to me?”) and have to admit that, indeed, we did lie to you about it, and for years.

On the other hand, do we want you to spend the first four or five years of your social life as the weird kid who says Santa isn’t real? (Bad enough you’ll likely as not be saying that you don’t believe in god when asked.)

For now, I’ll enjoy the photos of you and Santa, but in the longer run, Mummy and I have a lot to talk about …