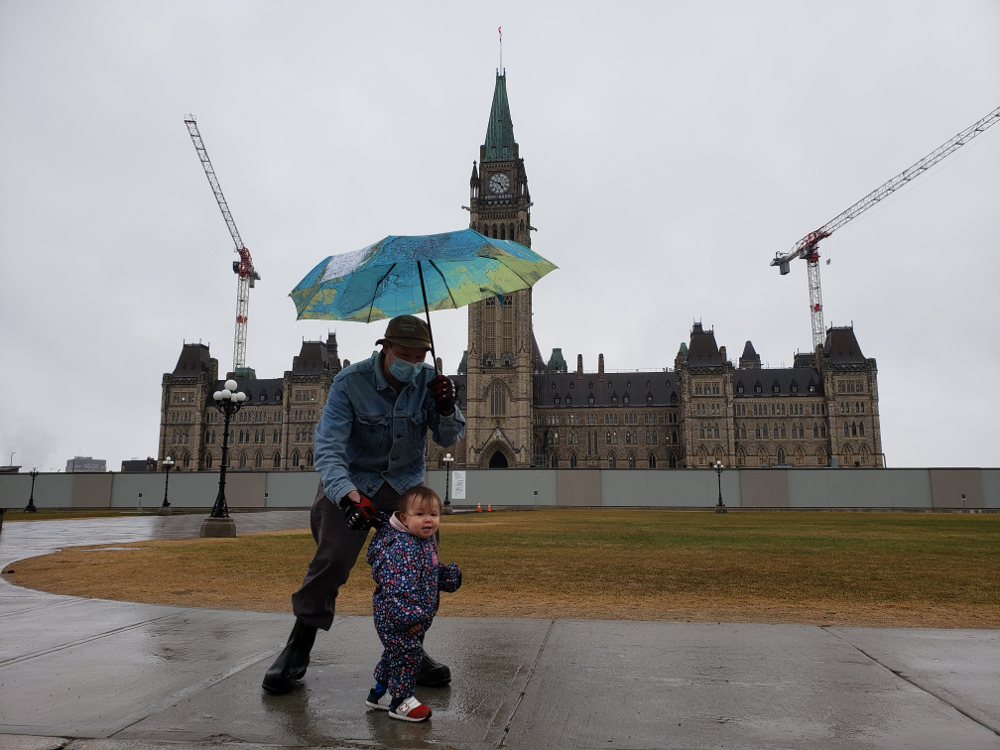 Yesterday morning I had to drop off our rental car from the day before. As you almost certainly won’t remember when you read this, we drove to Parliament Hill and showed you the Eternal Flame and the House of Commons, though you were much more interested in the buses that roared along cold and rainy Wellington Street in front.

Later, we took you to the National Gallery, where the three of us had the square out front almost entirely to ourselves. And you loved that space!

No snow, no grass, no mud, to bother you, you were able to run and dance around (and fall) with abandon, while I had no need to worry about dogs or traffic or Covid-shedding pedestrians.

Win, win, as they say, though it was a miserably chilly, rainy afternoon, so Mama and I called it quits sooner than you wanted to.

Anyway. That was Friday.

On Saturday, you and I arose as usual, but around 09:00 hours, we went upstairs to wake Mama and I left you with her while I took the car back.

When I got home, Mama excitedly told me about what you had done with her while I was away.

In our house, we have two changing stations — one in your bedroom (also my former, and Mama’s temporary, office), the other in our bedroom, where your original crib/changing station still has its place beside our bed.

Anyway, there were no diapers left in your bedroom, so she brought the empty storage box to our bedroom for a refill. You, of course, took over the job and set to work removing the diapers, one by one, from their packaging and placing them (relatively) neatly into the black box.

Once it was full, Mama reminded you that the box belonged in your bedroom. You, however, decided that the bag, which still had four diapers in it, must come too.

You tried to carry both box and bag, but realized that was too much for you, so you took the bag down the hall, set it down by the changing station, then returned for the much bigger, and heavier, box and carried that over too.

Once you were both in the office, Mama asked you to put the box on the shelf, but you pointed to the orphan diapers and insisted they should be packed into the box as well.

Mama argued, saying that there was no more room, but you took one of those orphans and pushed it into the side of the box!

Mama saw the wisdom in your method and helped you put the other three into it as well, after which you took that big box and put it on the shelf, where now it was meant to be!

And why am I telling you all this? In part, to record just how much a toddler likes to help — no doubt that is partly imitation, and an important part of learning — but also so that we can hold it over you when you’re 14 and your room is a disaster area, and Mama needs some kind of a stick to use to get you to pick your damned close off the floor!

With tongue partly in cheek,

I love you always,