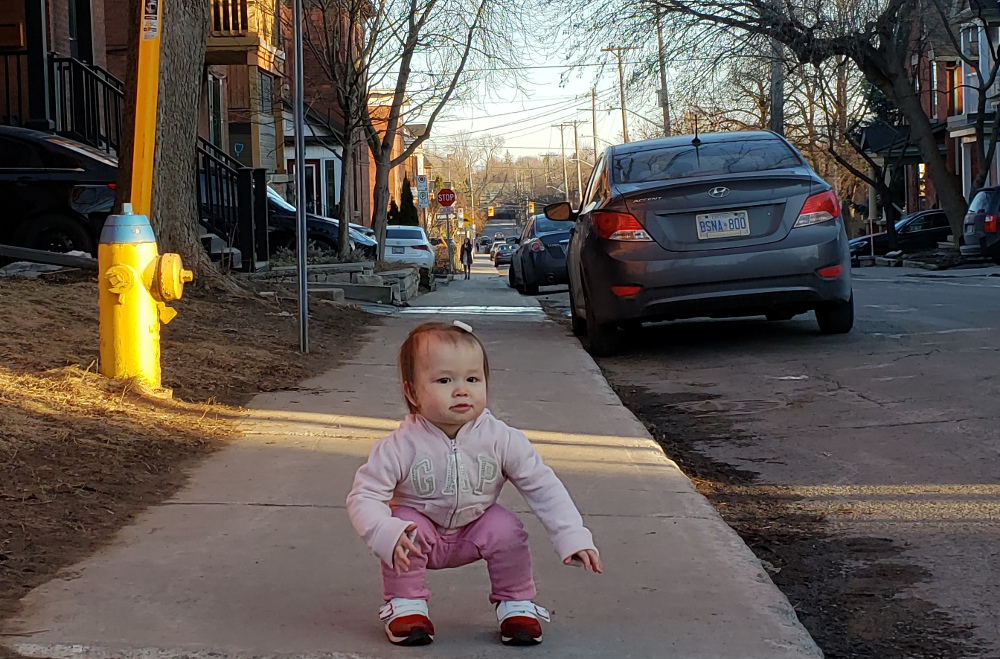 The last time I wrote you, winter was just starting, and now here it is full-on spring. Nearly all the snow has melted — all of it, on our sunny side of the street — and where you were still pretty unsteady on your proverbial pins, you’re now not just a toddler, but a scamperer and a runner who (holding Papa or Mama’s hands) now descends stairs two at a time and who, once in a while, is able to haul herself up onto the couch all by yourself.

In any case, it’s spring, and we are spending a lot more time outside than we did over the winter.

To tell you the truth, winter was a bit of a disappointment to your Papa. I love the winter, but you … well, you didn’t seem bothered by the cold, but — my god! — you wanted nothing to do with snow!

You would be willing to walk only when the sidewalks were clear. Even a sheen of snow or ice was enough to send you clinging to my leg, begging to be swept up into my arms!

Which maybe isn’t that surprising. It took you a long time to lose your wariness about grass, too.

So I wasn’t really surprised when your dislike of snow segued into an corresponding disdain for setting foot on the soggy, soggy grass outside the local dog-park, never mind the melt-zones where ice was dissolving to mud.

What was a bit of a surprise, a couple of weeks ago now, was that you were more than happy to wade through the ankle-deep water of an ice-lined puddle to reach the fence keeping us civilians from the dog-people in our local dog-park.

So what a pleasure it was this past Tuesday to be able to report to Mama that you’d been willing to make some exploratory moves onto, first, grass by the fence and then, later, to actually climb a small hill, part grass, part mud (with a minor admixture of dog-poo) using your own two legs!

Not that there hasn’t been plenty of other progress since I last wrote you, but this one was particularly satisfying. Taking you out for no more than five or ten minutes (unless I carried you everywhere, which is getting to be harder and harder to do) out of doors after spending maybe twice that long getting you ready became quite a disincentive.

Here’s hoping this is just the start of messes — and come December, snow-angels and snow-people — to come!

With many apologies, to you and to Mama, I remain your devoted and loving …