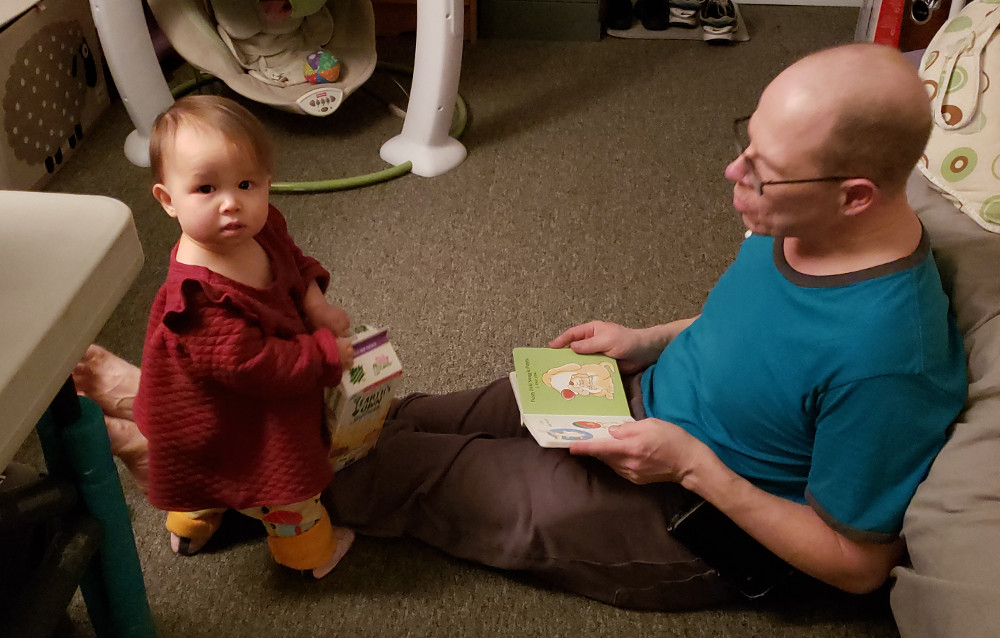 Baobao has entered a new stage. She likes to be chased, especially when I am singing to her from Sandra Boyton’s delightful book, Snuggle Puppy. In two places, the song reaches a climax at which point the singer offers the listener — the snuggle puppy — a hug and a kiss.

At first, she would just listen next to me and take the hug and kiss as it came, but last week began to run away from me as we reached the point of contact.

I told Raven about the new development the other day, saying, “Sometimes she lets me, and sometimes she doesn’t.”

“But she wants you to,” said Raven.

“I know,” I said, “but I think it’s important for her to know that, when she says No! it matters, even to her Papa. She’s going to have to deal with all sorts of boys and men who will want and expect her to kiss them, and I want her to know that, if she doesn’t want to, she has every damned right to say No! and to enforce it.”

“You’re right,” said Raven, much to my pleasure and relief.

Raven’s surprise helped me to articulate something I have felt for quite some time: that a vital part of educating a child — especially for girl child, in a society in which sexual exploitation and violence is all-too-common — is not just about what she should or should not do, but about developing and exercising her autonomy.

Autonomy? For a toddler?

Damn it, yes! autonomy for a toddler!

Sure, a parent has no choice but to over-ride a small child’s desires. Pretty much every day, in truth — she might not want a change of diaper right now; he might want to hear that story again! &mdashl; but that doesn’t mean a child’s desires, especially about how and when they are touched, shouldn’t be honoured whenever it’s possible.

I know that I want my daughter to know, in her heart of hearts, that her body is her body, to know that her No! matters, and that she has every right to enforce it.

And so I find myself now, when I chase her for that kiss (even when I have to crawl from the living room into the kitchen, and all the way underneath her high chair), I ask if I can kiss her, even when I know that she wants me to catch her. And when she doesn’t say Yes!, I back away.

Her body, her choice. She can say No! even to her papa, and that’s okay.