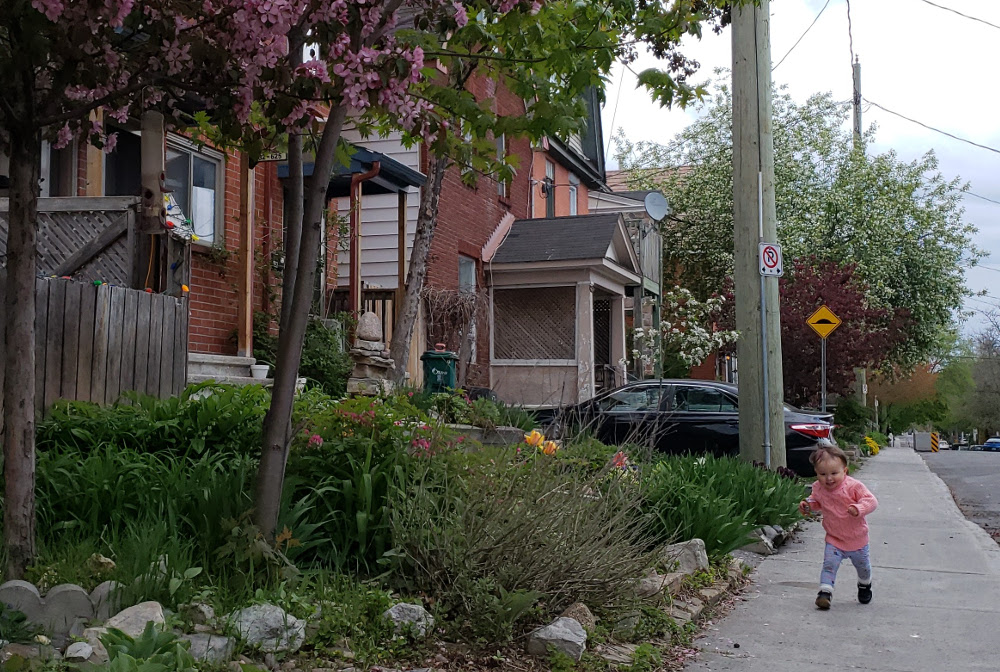 It’s at once hard — and super easy — to believe that it’s been more than a full month since my last letter to you.

Hard to believe simply because I was once a pretty damned good letter-writer (if I do say so myself), able to write often, and at considerable length, to multiple correspondents concurrently. Easy, because I have never in my life been quite as busy as I have been since you came along.

I will probably go into this at greater length some time in the nebulous future, but for now I will just say that being a house-husband is hard. My normal working day runs at least 12 hours, six days a week (Saturdays I usually visit Grandpa Carl, and Sundays I get to nap after Mama wakes up). I’m not complaining — caring for you is far and away the most rewarding work I’ve ever done — but it does tend to leave me, at the end of the day, without much energy for letter-writing.

And so, this one I begin as you nap on Friday, May 22, after only a (relatively) brief foray out of the house to pick up a few things for our ostensible pantry. Whether I’ll be able to finish it before you wake up is another question entirely …

(Note from the afternoon of Monday, May 24th Friday, May 28th): I didn’t manage it. And here you are, napping again. Fingers? Type — ah say! — type, like there’s no tomorrow!)

Fear is a strange emotion. Sometimes it is completely rational — if you see a large bear running at you it would be if you were not afraid. Other times, it makes no sense at all. For example, I have a fear of heights that sees me nervous standing on a step-ladder a metre off the ground, but absolutely, serenely un-bothered as a passenger in the cockpit of a single-engine airplane experiencing heavy turbulence over the Rocky Mountains.

So it came as no great shock when you developed your first phobia. An inexplicable (to us) terror of the white tower fan that had spent the winter hibernating near your crib, and with which you had had no problems last summer.

After your fears grew worse instead of better, I temporarily “solved” the problem by just getting the fan out of your room. I moved it to our storage room and Mama and I talked about how we would have to do something about it soon, since we don’t have air conditioning, and we’re going to need all of our fans once summer rolls in for real.

Well, this past two Wednesdays ago, summer was due, and that morning I set out on a mission.

First, I made a big production of taking the screen off of the fan in the kitchen. That one is a traditional circular fan on a stand, with three propeller-like blades. I filled a basin with water and a little dish-soap, made a show of tearing a ratty old t-shirt into rags, then took off the screen, then the blades, and cleaned them, incessantly narrating the procedures as I went along.

When I had the thing reasonably clean, I reattached the blades, then the screen, and invited you to turn it on. And not too surprisingly, you balked. I slapped the machine around a little, to show you that I wasn’t afraid of it, then pulled out my phone and brought it to where you were nervously standing, halfway across the kitchen floor. I had a video from last summer queued up, which Mama had sent me the night before, in case it might be helpful.

Well — hallelujah! — that seemed to help, and I managed to coax you towards the infernal machine and, eventually, convinced you to press the on/off switch a few times.

Next was a little scarier. The fan in the living room is also a tower, like the one that haunted your bedroom, though this one is grey with a bizarre, 1970s-style fake-wood frame around the screen, rather than plain white.

Anyway, I gave this one a damp dusting with a little physical abuse thrown in to show you that it, too, was a mere machine, not a monster. And you were willing to press its buttons, and even to let it blow your hair around.

Optimism blooming like dandelions in spring, I told you we were now going to head upstairs.

When we reached the top I picked you up and explained we had another fan to clean. I had already taken it from the storage room and set it up in your bedroom, along with the wash-basin and rag so, when we got there, I matter-of-factly set you down, closed the door and explained that we were going to clean this fan, too.

You were nervous, and watched from a distance with your back against the door as I set to work. (Unlike a traditional bladed fan, there really isn’t much to do when it comes to cleaning a tower; nothing is meant to be disassembled, so basically you just dust the outer surfaces and pretend nothing has accumulated inside the machine.)

Once I’d wiped it down, I went through the ritual again.

I lifted you up, showed you the power button, and the button that starts and stops the fan from rotating.

“Do you want to try?” I said, and helped her to press the button. On. Off. On again. Rotate. Rotate off. And presently, there seemed nothing more to do.

We left your room and went downstairs. Mama was in the kitchen. “How did it go?”

I grinned and shook my head, all false modesty. “I’m feeling,” I said, “like a pretty good dad.”

Of course, real life stories don’t often tie up quite that neatly. And this one hasn’t, either.

For whatever reason (or reasons), neither fan downstairs bothers you, but the one in your bedroom still makes you uncomfortable though (knock wood), it doesn’t terrify you anymore, either.

It doesn’t terrify you, and you’re willing to sleep in your crib in that room, but you’d rather not wander around it. If you have to, you hang close to the door and, if you’re able to, you’ll hang in the hall outside the room instead.

So. Work in progress, I guess. Which is what all of life is, too, come to think of it.

P.S. Saturday, May 29, 2021 — This morning, after getting (you) changed, your big brother Carl the Second decided to show you there was nothing to fear. I’m not sure, but you seemed at least somewhat impressed.