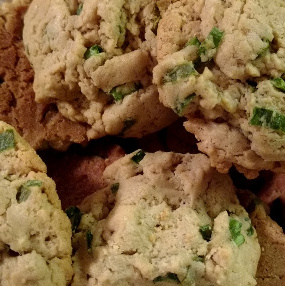 Getting cookies: The privilege of being a “nice” papa (to be)

Raven is also doing well, suffering very little from morning sickness. The biggest problem is that she tires easily, and that her already-remarkable sense of smell has doubled, or even tripled, in its olfactory powers. Which means, though her taste buds still love all manner of foods, her nose strenuously objects to all manner of cooking aromas.

Which, from what I’ve heard and read and observed, means we have thus far gotten off pretty easily. Mostly, we are excited about the future and prone to acting like doe-eyed snuggle-pusses. (Go us!)

Meanwhile, as I thought I had already written here but am unable to find, I fully expect to get all sorts of unwarranted praise — or cookies — simply for Parenting While Male. In other words, for doing what women are expected to do as a matter of course.

What I didn’t predict, was that the cookies would start coming so soon, or that Raven would be the one to start feeding those baked goods to me.

But there we are. A couple of weeks ago, snugging up before sleep and talking about then future, she said, “I think I love you more now than I did before.” Before I could query, she added, “Not that I didn’t already love you, but you’ve been so patient with me, and so helpful and thoughtful … I don’t think most men would have been.”

By helpful and thoughtful, she meant pretty much only that I’ve been doing more of the cooking, that I haven’t complained when she’s prepared instant noodles for herself and left me to deal with left-overs when I roll in from work at 3:00 o’clock in the morning, and that I haven’t complained when she’s left dishes for me to clean up, and that sort of thing.

Not, I think, really that big a deal. I tried to (and, I think, succeeded) explain that from my point of view all that is simply what one does for one’s partner in times of need. She is, after all, growing a fucking new human being inside her abdominal cavity; that must take some extra energy! And never mind all the chemical and hormonal changes going on.

So, y’know, I don’t really feel as if I’m doing anything special, or particularly worthy of much more than an occasional, very casual, thank-you in acknowledgment, as I do when she comes home with a couple of high(ish) end chocolates or something picked up on her way home from work.

Benefiting from low expectations, I guess. Maybe I should thank generations of selfish men for the unwarranted appreciation I’m getting now.

Funny thing is, I half-expect to get chocolate chip plaudits for writing this post, for acknowledging the reality of my male privilege in the first place, to the point where I’m almost tempted to not to post this at all.

But you folks will restrain yourselves, won’t you?