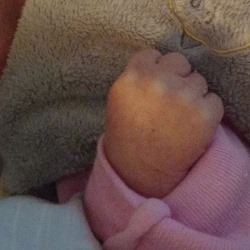 Well. Hey there … It’s kind of weird being up here on this stage. The lights are really bright, and I can’t see whether there’s anyone out there in the dark.

*taps microphone* Is this thing even on?

Guess I’ll dance like nobody’s watching and find out later whether anybody is ….

We have been a couple ever since that fateful March evening, when I draped my arm across her shoulder and she said that, yes, I could kiss her if I wanted to.

During the almost-nine years Raven and I have been together as a couple, we have talked about having a child as a theoretical possibility, an unlikely thing, but not something either of us was willing to write off.

But last May, Raven got a job with the federal civil service and a number of things changed for us. For starters, I am no longer spending 10% of my gross annual income on medical care — we kan haz benifitz!.

Coincidentally with the change in her employment status, I think was the fact that she turned 35 in November. Raven’s biological clock wasn’t just ticking, it was counting down, and pretty fast. And so she brought up the possibility of having a baby in a much more immediate sense. And I said that, yes, at 53 my own biological clock was nearing the end-point of starting a family, but that it hadn’t quite reached it just yet.

My acid reflux and arthritis aside, I am in pretty good health and its not too unreasonable a gamble to think I’ll be physically capable of being a dad (as opposed to a mere sire) quite a few years longer than I’ll need to be.

Yes, the state of the world, of the environment in particular, gave us pause, but the future has never been guaranteed.

After consulting our GP and getting some basic tests done, we decided to give it a try.

On Tuesday morning, she woke me up early, waving the test-strip before my bleery eyes.

Funny thing is, we’d been prepared to try and try and try. My own parents have told me it took them about three years of trying before I finally came along.

But we’re very nearly certain that we managed to “hit the jack-pot”, as Raven put it, the very first time I didn’t pull out.

It seems that my boys can really swim!

Of course, it’s really early days yet, and much can go wrong. Please don’t start offering congratulations or that sort of thing, not yet. But if things don’t go wrong, well, we’re about six weeks along, so I guess we’ll be looking at a little Chinese/White hybrid joining the world sometime in August.